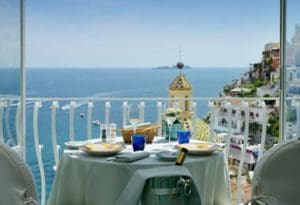 Hot news flash! Le Sirenuse is opening a new restaurant in Miami this spring and anticipation is high.

Admittedly, we are partial to the legendary hotel Le Sirenuse. After all it is family-owned, just like All Aboard and has an enormous personality and sense of place, just like us. The Sersale family is always striving to make small enhancements, without altering the essential spirit of the hotel. Le Sirenuse is one of our five absolute favorite places to stay on the Amalfi coast.

Dining at the Michelin-starred La Sponda, surrounded by the extraordinary panoramic view from the terrace, is an experience in itself. The Southern Italian cuisine includes local ingredients indigenous to the Amalfi coast and inspired by the culinary traditions of the region.

Le Sirenuse Restaurant and Champagne Bar in Miami will be the first foray outside of Italy for the hotel. The restaurant will be housed at the Four Seasons Hotel, within the iconic, historical landmark, The Surf Club. Originally built in 1930, the Surf Club was a destination for the rich and famous, including Winston Churchill, Frank Sinatra and Elizabeth Taylor. Now, U.S. architect Richard Meier and Parisian designer Joseph Dirand, have managed to emulate the intimate, cultured ambience of the original La Sponda in Positano at the new Miami location.

Thirty-two year-old Antonio Mermolia, tapped to be the chef of Le Sirenuse, made his way from Italy, New York, and, ultimately, Miami. He intends to carry on the tradition of the original restaurant in Positano by using local, fresh fish and seafood and other heirloom ingredients in authentic Mediterranean style.

Personally, I look forward to having a Le Sirenuse cocktail al fresco in Miami. I wonder if they will import lemons from the Amalfi Coast. Either way, I’m going to enjoy “la dolce vita” in style.